This book is intended for students who have received their confirmation, includes 37 lessons, and is appropriate for grades 10-12.

Since the Baltimore Catechism was first launched in 1885, it has proved an incomparable tool for passing on the faith to the next generation. The revival of this Catechism reflects the growing realisation among Catholics, that to accept, practice and defend the holy faith, we must first understand and learn its truths. The Baltimore Catechism clearly and concisely explains what Catholics believe.

The question and answer format is useful for anyone who wants to grow in his or her knowledge of the faith of the Catholic Church. It is also perfect for parents who want to instruct their children in the fundamentals of Catholicism.

Be the first to review “Hardcover Baltimore Catechism No. 3 (Volume 3 Hardcover)” Cancel reply 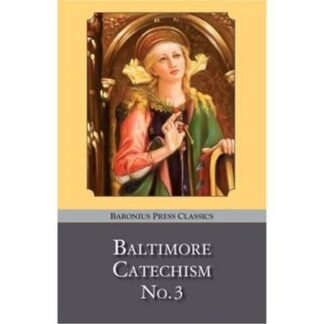 You're viewing: Hardcover Baltimore Catechism No. 3 (Volume 3 Hardcover) $11.95
Rated 0 out of 5
Select options