The Noonday Devil Acedia: the Unnamed Evil of Our Times – By Dom Jean-Charles Nault

The noonday devil is the demon of acedia, the vice also known as sloth. The word “sloth”, however, can be misleading, for acedia is not laziness; in fact, it can manifest as busyness or activism. Rather, acedia is a gloomy combination of weariness, sadness, and a lack of purposefulness. It robs a person of his capacity for joy and leaves him feeling empty, or void of meaning

Abbot Nault says that acedia is the most oppressive of demons. Although its name harkens back to antiquity and the Middle Ages and seems to have been largely forgotten, acedia is experienced by countless modern people who describe their condition as depression, melancholy, burn-out, or even mid-life crisis.

He begins his study of acedia by tracing the wisdom of the Church on the subject from the Desert Fathers to Saint Thomas Aquinas. He shows how acedia afflicts persons in all states of life— priests, religious, and married or single laymen. He details not only the symptoms and effects of acedia but also remedies for it.

About the Author
Dom Jean-Charles Nault, O.S.B., has been the abbot of the Benedictine Abbey of Saint-Wandrille (or Fontenelle Abbey) in Normandy, France, since 2009. He entered the monastery in 1988, earned a doctorate in theology from the John Paul II Pontifical Institute in Rome (Lateran University), and received from Pope Benedict XVI, then Joseph Cardinal Ratzinger, the first Henri de Lubac Prize for his thesis on acedia, La Saveu de Dieu.

Be the first to review “The Noonday Devil Acedia: the Unnamed Evil of Our Times – By Dom Jean-Charles Nault” Cancel reply 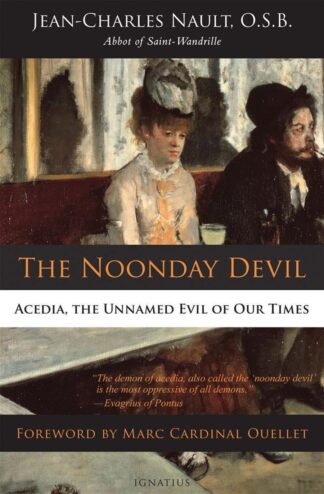 You're viewing: The Noonday Devil Acedia: the Unnamed Evil of Our Times – By Dom Jean-Charles Nault $17.95
Rated 0 out of 5
Add to cart